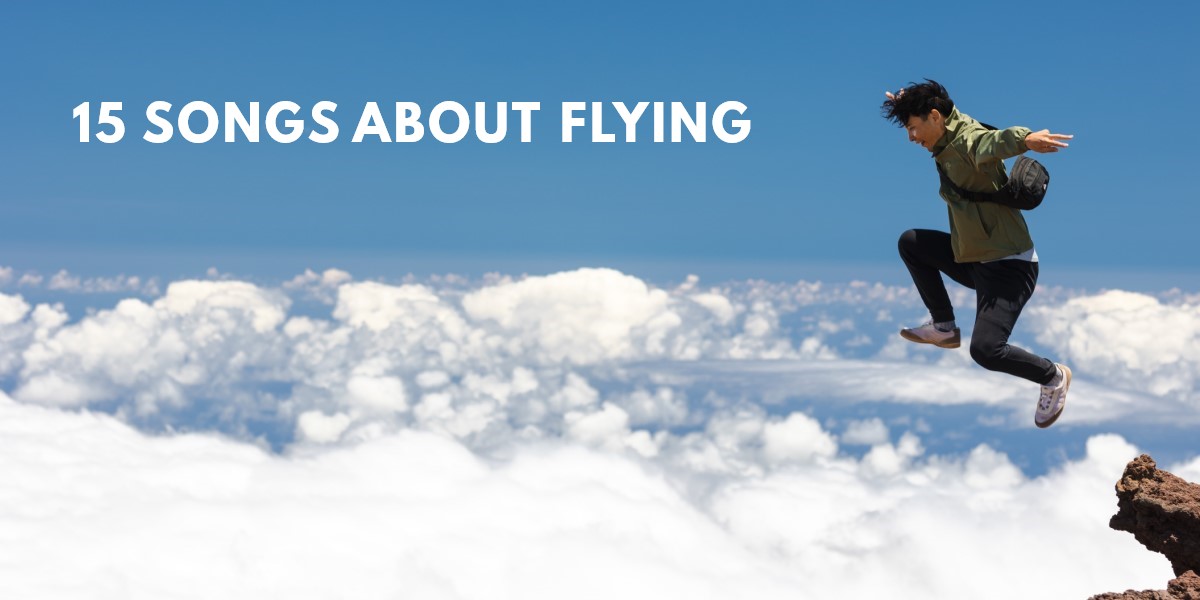 Many well-known songs are about traveling and flying. Volare by the the Gipsy Kings or Frank Sinatra‘s Come Fly with Me are probably the first that come to your mind. In this blog we bring 15 surprising songs in different styles and in different languages. You’ll discover some bizarre but unique songs, as well as some good melodies, beats and vibes.

We start with a cheerful up tempo song by the Red Hot Chili Peppers. The psychedelic clip does not immediately show a connection with flying. But if you listen carefully to the lyrics, frontman Anthony Kiedis asks his beloved to ‘fly away’ with him.

From a song with over 100 million views on YouTube we jump to a song with only 1000 views! Bienvenue à Charles de Gaulle is a special and unknown song by Euphonic Traveler.

The story is about a business trip to Paris. The song begins with a plane landing at Charles de Gaulle, where Christine awaits you as your local guide. The song contains few words, but your imagination can easily fill in the silence. Listen to this very sensual and mysterious song with a glass of French red wine.

We can’t fly is a sunny song by the Belgian-Italian Aeroplane band. The electronic keyboard beats make you move, even in your seat. The gospel choir in the background provides the necessary drama.

Unfortunately, this promising band broke up before the song was released.

With Big Jet Plane, the Australian siblings Angus & Julia Stone take you into a daydream. Escape from reality and dream away with this soft song.

The video clip shows the exhausted shop assistant Lizzy dreaming about an unknown love that takes her on a world trip. What is daily reality for us as crew, is an unattainable dream for Lizzy and so many others.

In the video clip, the couple literally flies through the air, as if it were all normal for humans. The lyrics are inspired by a trip from the artist to Italy and are about a long distance relationship across the Atlantic Ocean.

A song for fans of heavy dance music. With this song, the Belgian Subs pay tribute to the supersonic Concorde as well as to love.

Fans of French cinema will recognize the voice of actor Jean-Pierre Castaldi, known for the Astérix films. In the glamorous clip he shows the best of himself.

The English band Public Service Broadcasting takes us back to the glory days of the legendary Spitfire. The mixture of classical instruments, electronics and the voice-overs makes this song run like a train.

The video clip incorporates original pieces from Leslie Howard‘s 1942 biographical film “First of the Few”. He plays the role of R.J. Mitchell, designer of the Supermarine Spitfire. “A bird that breathes fire and strikes out death and destruction”.

A song that cannot be missing in our overview is Sunset by the English Fatboy Slim. Bird of Prey is actually a musical poem by The Doors.

The video clip features original footage from US President Johnson’s 1964 “Daisy” TV commercial. The dizzying flight does not begin until two minutes into the clip. Definitely a must for fans of Top Gun!

This all-time classic by the American rock band Foo Fighters is undoubtedly the funniest music video ever. We see the band members embark on a special flight with very bizarre crew members and fellow passengers.

A fun parody of all kinds of passengers that we welcome onboard our flights every day. You will certainly recognize most of them. You’ll notice that all actors are actually members from the music band.

The oldest song on our list, released by the Rolling Stones in 1966. Flight 505 has been much written and discussed over the years.

The phrase “The Day the Music Died” would refer to the airplane crash in 1959, killing Buddy Holly, Ritchie Valens and Big Bopper. But that is not really certain, because the text “He puts the plane down the sea” does not match the facts. The flight crashed on the mainland near Mason City, Iowa. Flight number 505 would be derived from the very first flight of the Stones to America.

Tamiga is a popular artist, known from songs Sunset With Me and Love is in the Air. You recognize her Romanian roots in the sound style and beats.

Fly with me is a light-hearted pop song by her band Tamiga & 2Bad in 2021. The song puts you immediately in a summer mood...

The London band White Lies used to be called Fear of Flying.

For this song, the bassist was inspired by a transatlantic flight, worrying about his family should the plane crash. A catchy song that is really worth listening to.

An up-tempo song by Jean Claude Ades that gives you an instant positive boost when you’re feeling down. That’s what this song is about, Fly Away and escape from reality when you feel you need to get away.

Listen to this cool melody and you’ll feel the vibes right away!

Voa is a Portuguese song released by Anjos in 2021. A strong song, deep from the heart, gives you the courage to move on with life after a difficult period.

We close our list with yet another completely different style. Not pop or dance, but Celtic! The Irish song Flying by Cait Agus Sean makes you dream away.

If you’re open to this different style of music, we highly recommend the full album! Reading a book with this album playing in the background, that is pure relaxation.